There can’t be anyone left living in or visiting Tokyo who hasn’t seen them at least once: groups of go-karts dashing through the streets, dressed in colorful costumes of lovable cartoon or video game characters. But did you know that you can not only join those cheerful groups as a tourist, but actually work as their tour guide, leading the squad through the exciting city? Adam E. (28) from Australia landed one of the popular jobs as a street-go-kart guide and told us everything about it.

Adam, how did you originally find that job?

So basically I went on a holiday to Japan before. And doing the street kart tour myself as a tourist. I looked at the guy in the front and thought, “He’s getting paid for this! If I can I want to come to Japan and try this.”

But when I first got to Japan for my Working Holiday then, the company just hired someone, but I sent them an email anyway, introducing myself. Said I love driving, meeting new people, Tokyo and everything about it. Since then I checked the job market every day for the job to become available and around 2 months later it actually did. I applied officially through a job advertisement page that also told you how many people had applied for the position so far. It was exactly one person – me! The company remembered my email I sent a few months before and said “Hey, you seem pretty passionate, come in for an interview.

That’s how I got the job. I knew I wanted it and I didn’t let anything stop me. I know two month waiting is generally not too bad, but it was tough to be patient for it, because of some payments I had to make back in Australia, trouble back home. But I knew that was what I wanted to do, so I even declined another offer for a second interview for a job as an English teacher that came up at the same time as the street kart job. That was quite risky, but the timing for my dream job was just perfect in the end, it came right when I needed it. 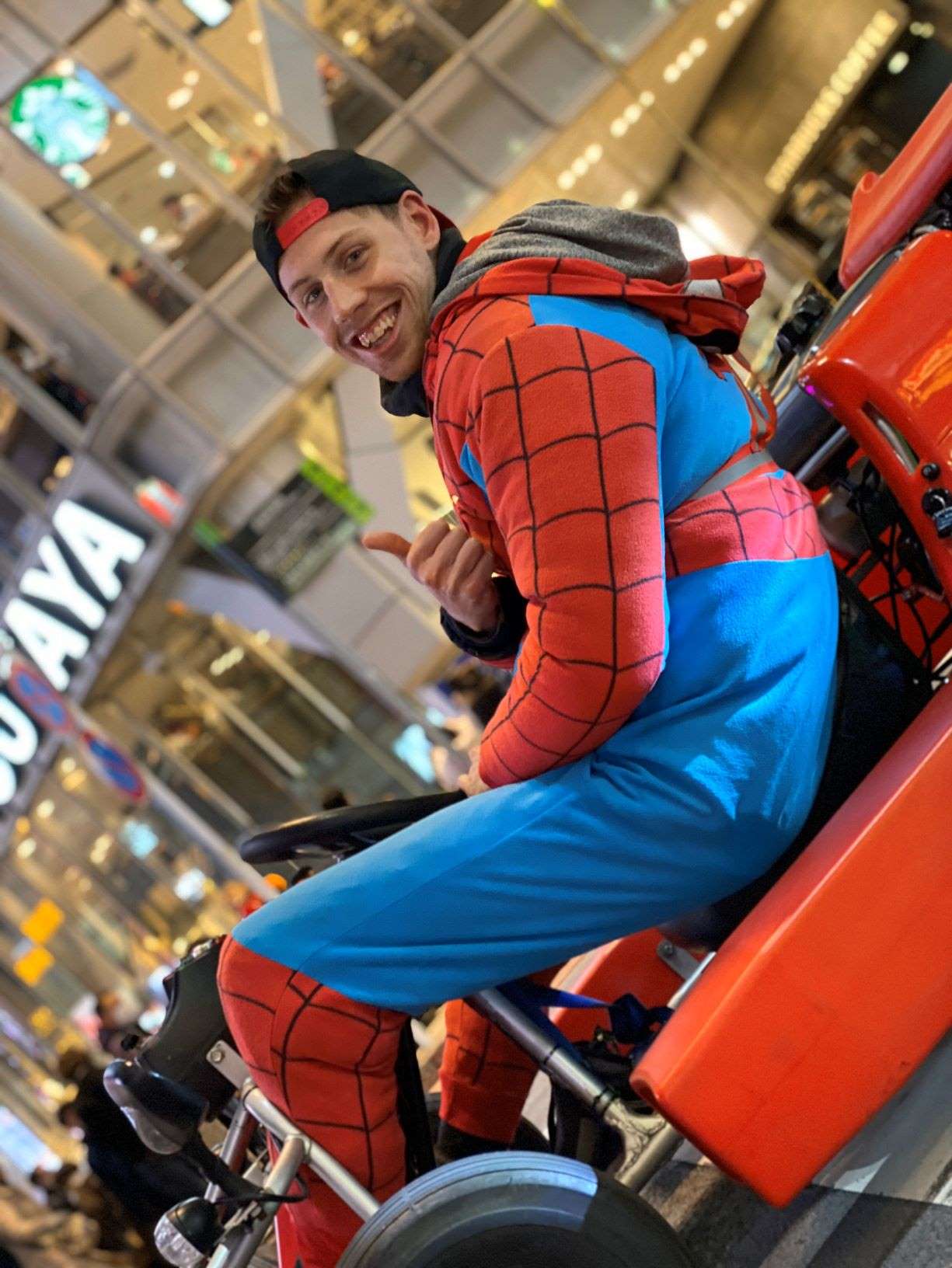 Excuse this question, but what exactly is a street-go-kart guide even doing?

It’s basically being a city tour guide! Just on wheels. I would go by go-kart with a group of up to 6 people (everyone has their own kart) and drive all around Tokyo, starting in Shinagawa, through Roppongi, passing by the Tokyo Tower, going through for example Omotesando and Shibuya, or over the Rainbow bridge to Odaiba, depending on the route the group chose to take. I would take pictures of the group, explain where exactly we were. And just make sure that the customers are having fun, which was the main focus of the job. Afterwards, when I came back to the office, there would be the go kart maintenance, admin stuff, greeting new customers, choosing costumes with them.

Guiding customers on go-karts through the streets of Tokyo sounds challenging. Was there proper training?

Yes, there was a training period. You start off in the back of the group as a customer, just watching what the other tour guide does. Depending on how quickly you learned the courses, you get to go into the front after a few times, with a small group of customers first and you have the experienced tour guide in the back following you around, giving you advice through an earpiece, for example if you lose your way.

For me in the end that whole process took around a month, until the tour guide who trained me was basically just a customer observing. But I was lucky, because I had driven in Tokyo before and I remembered the different spots and in the end I knew some of the stress of Tokyo already. Different nooks and things like that. 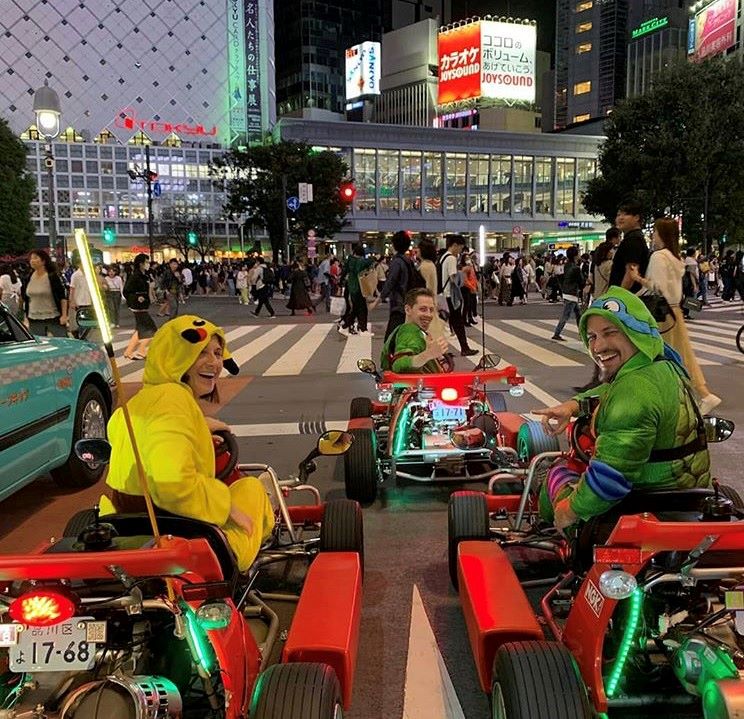 What were your general working hours?

So I went a bit crazy with it [laughs]. I loved the job that much that I just asked my boss to give me as many shifts as possible. I ended up working 6 days a week, up to 12 hours shifts. But of course no one has to do that. It was just that I enjoyed it so much and on my days off I was sad. And it was probably the wrong thing doing it, but I wanted to.

Generally you could do it anywhere between a full time or weekend job, or you could do it every day only in the afternoon, or however you liked it. It was kind of up to you, because it was that kind of job where you could pick shifts somewhere between morning and night. That allowed you a big flexibility.

Very understandable, if you liked your work more than your free time, why shouldn’t you do it? Considering you earned money doing what you loved! Would you let us know about your salary?

Sure. So I was really lucky with this job. I started off with a training that was around 900 JPY per hour. Then, once I was trained off after around a month, I was getting 1,100 JPY per hour. But the best part of it, because I was serving overseas customers, was that there were tips. So if you did a good tour, you got rewarded for it. For a few months I didn’t use my wage at all, I was just living off my tips. That was during the rugby world cup in Japan when lots of foreign travelers were around. Maybe because I loved it so much, my energy was up every tour, and that got rewarded. 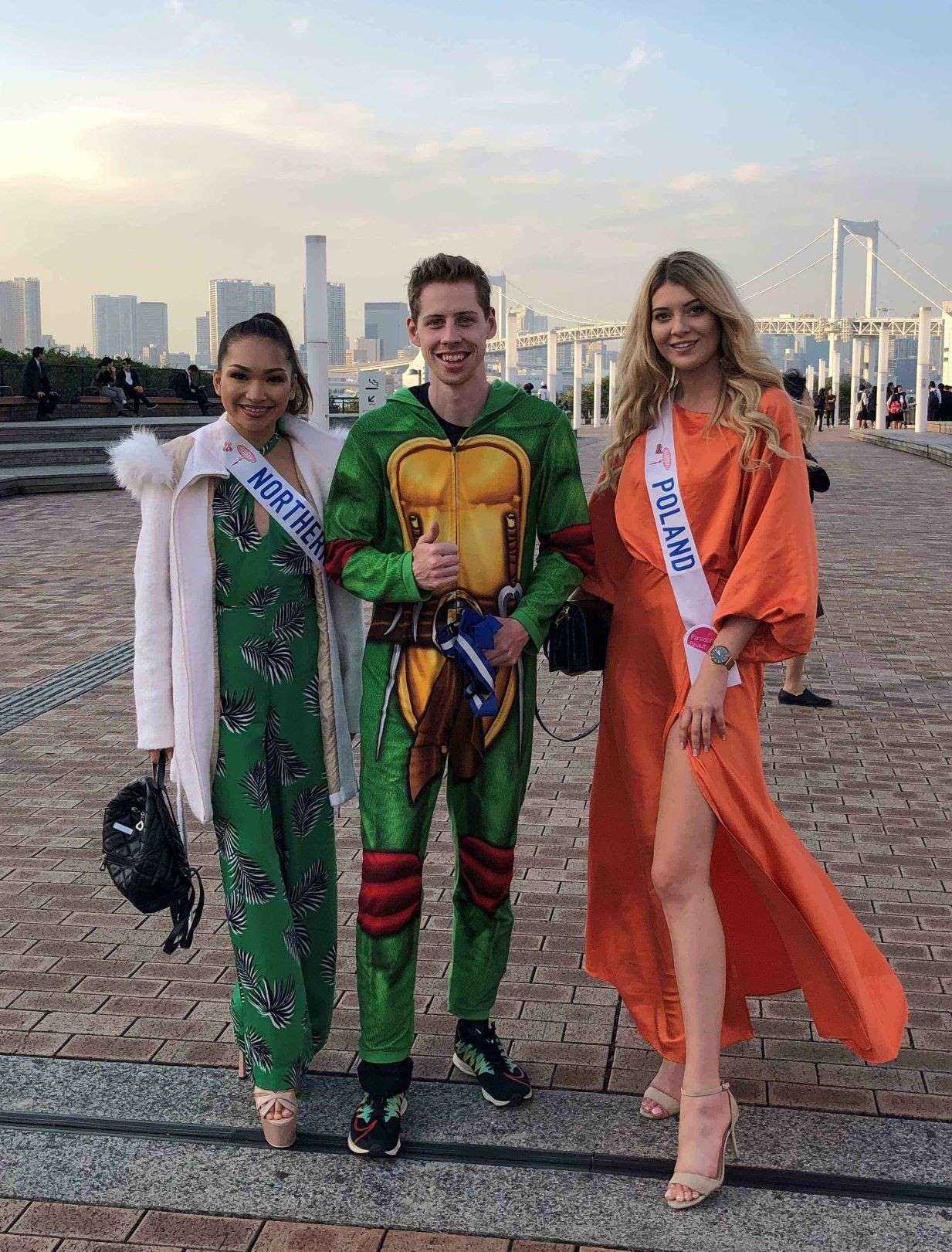 Do you understand Japanese? If yes, how did your Japanese skills improve while dashing around Tokyo?

The best thing of all was that it was all in English, I didn’t have to know any Japanese for the job at. It was a bonus that I could speak it a little bit to communicate with some of the Japanese staff members, but not a necessity. Basically 95% of customers were foreigners from all around the world, so English was the main thing you used. That was also the most fun part of the job – meeting new people from different countries everyday.

What were the general requirements for working there?

As a requirement I of course needed to have a driving permit. As Australian I can drive in Japan with an international license. Other nationalities, I think for example Germans, need to get their national license translated here in Japan and then apply for a Japanese license with the translation.

During the job interview the company just wanted to see how you were as a person, not my Japanese skills. After all, I needed to be a tour guide talking to people and making them feel comfortable. If you were too closed off as a person, the company may have thought “Oh, we don’t know if he is able to have fun with the customers.” Being an open character was important.

If you had a little bit of background in customer service that was a benefit… Also a plus was if you knew at least some things about Japan, which I assume almost everyone who is doing a Working Holiday here does. It wasn’t too grueling to fulfill the few requirements. It was just that I really needed a license.

Could you tell me something about your colleagues?

It was a mix of Japanese and internationals. The managers were Japanese. And a few Japanese students were also working there as tour guides, learning English along the way. But the rest of the team were internationals, like people from Brazil, Argentina, from the UK, America. I made friends from all around the world, that was a big plus. The bonus with the Japanese staff was that I could make a fool out of myself, trying to use my Japanese skills [laughs]. That was a lot of fun. There were a few mistakes, a few laughs, but they were always appreciative that I at least tried, and because they could test their English on me, it was kind of a language exchange. 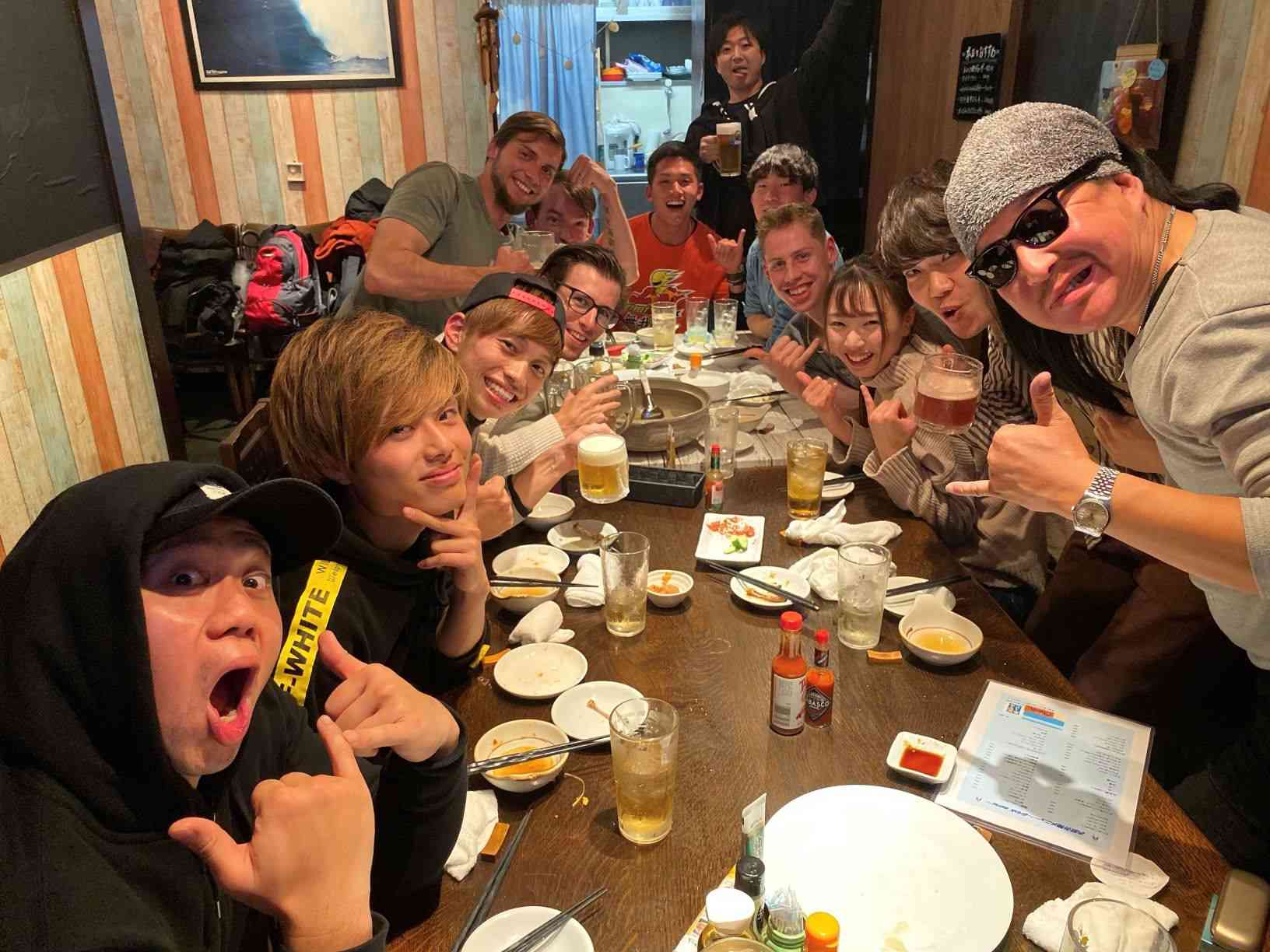 What did you do in your free time?

The share house that I stayed in had a lot of Japanese in it, so I’d be hanging out with them. But it also had free bike rental , so I’d just rent a bike and pick a direction and ride and take a lot of pictures of what I’d find. That was some of my favorite days, just riding around, experiencing Japan. I was living in Kanagawa, so I’d ride into Yokohama a lot, just experiencing the city. Once I knew the roads there I’d take off in a different direction. And then a few times I’d just go out into Tokyo, get some nice food, do some shopping, playing in some of the arcades.
Sometimes I left the Tokyo/Yokohama area, too. I’m into the band Babymetal and went to three different concerts of them, one of them was in Nagoya. Visited a language exchange partner in Osaka. Also I hired a car a few times, visiting another friend close to Fuji. So I didn’t go all over the country, but there were a few major cities I went to, but because I’ve done a few holidays prior to my Working Holiday I was just sort of living in Japan rather than being the tourist . 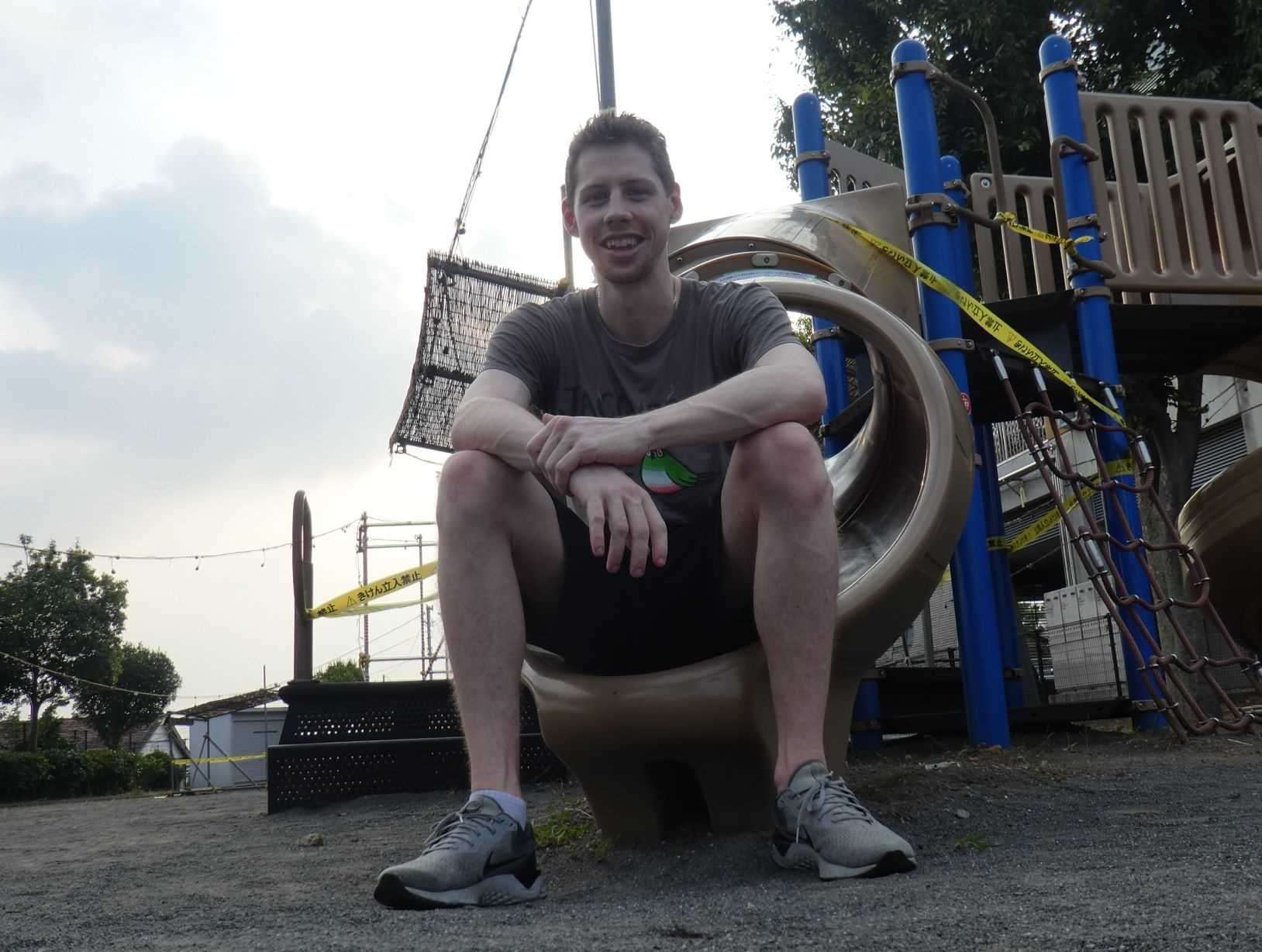 Could you give possible future Working Holidayers some tips?

And I’d just say do it, if you can. I didn’t have a plan other than I wanted that job. And I somehow made it work. I think if I could do it, anybody could.

Awesome, thanks for your time, Adam!