Henry K. (18) from Germany lived the ultimate Japan experience: residing on the rural island Sado surrounded by locals and working in a small restaurant/bar that specializes in Yakitori, grilled chicken skewers. Three months after his job ended, we interviewed him about his tasks, his activities aside from work and the ups and downs of living in the countryside.

Henry, when had you started the job and what were your general working hours?

I started in early December 2019. At the beginning I was planning on working there for 2 months, which I thought was a bit too short, as I heard that most Japanese employers prefer their staff to work for a minimum of three months. But luckily I was hired anyway. In the end I stayed for two more weeks than originally planned though, because I was in charge of training the new employee that came after me. 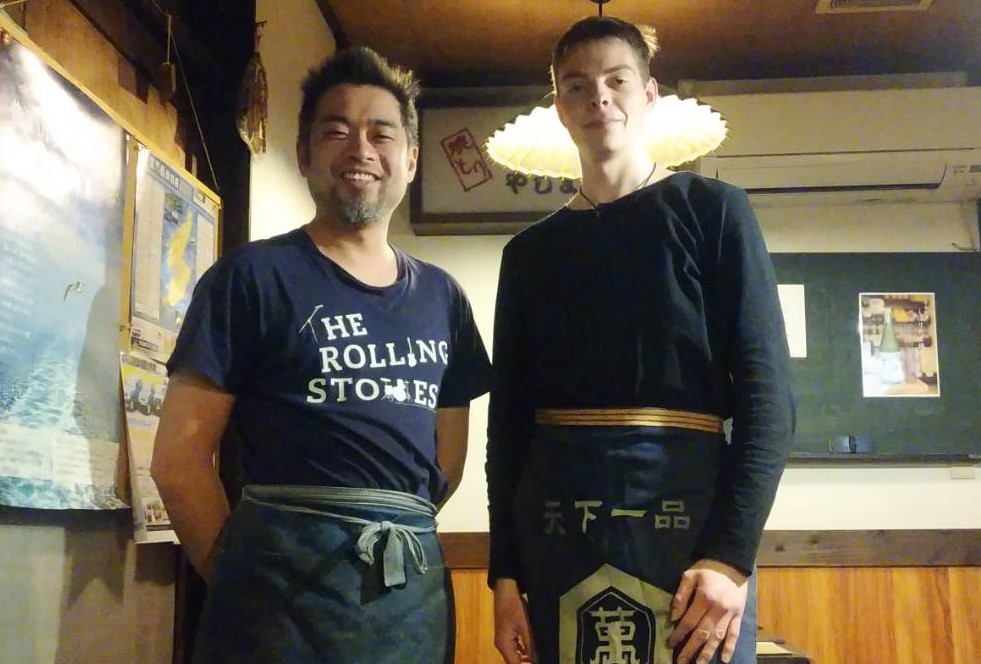 Generally I worked five hours per day, five days per week, Tuesday through Saturday, having Sunday and Monday off. My shifts started at 17:00 and ended, depending on how busy the bar was, around 22:00. Sometimes I stayed longer, if guests were still there to be catered for.

What did a typical shift look like? What were your tasks?

My boss, the owner and cook of the Yakitori bar, met me in front of my apartment and together we went and picked up the chicken skewers from a restaurant that prepared them for our bar and that was conveniently located in the same building as my apartment.

Then we drove to the bar and started our preparations in order to open at 17:00. Preparing meant for example to check the reservations of the day and arrange the spaces for the guests. Once the guests arrived, my tasks were to offer them a seat, take orders, serve drinks and food. The breaks, when all guests were served, I used to wash dishes or to talk to the guests. It was only me and my boss working in the small bar. He was the main cook, but I helped out in the kitchen, too, as much as I could.

The evenings ended when all guests were gone, which sometimes could be long after official closing time, for example when a nomikai (drinking party) was too good to leave, and we cleaned and tidied up the bar, kitchen, stored the dishes where they belonged and took down the noren (a kind of curtain that is hanging above the door of traditional Japanese restaurants or shops).

What did you do in your free time? 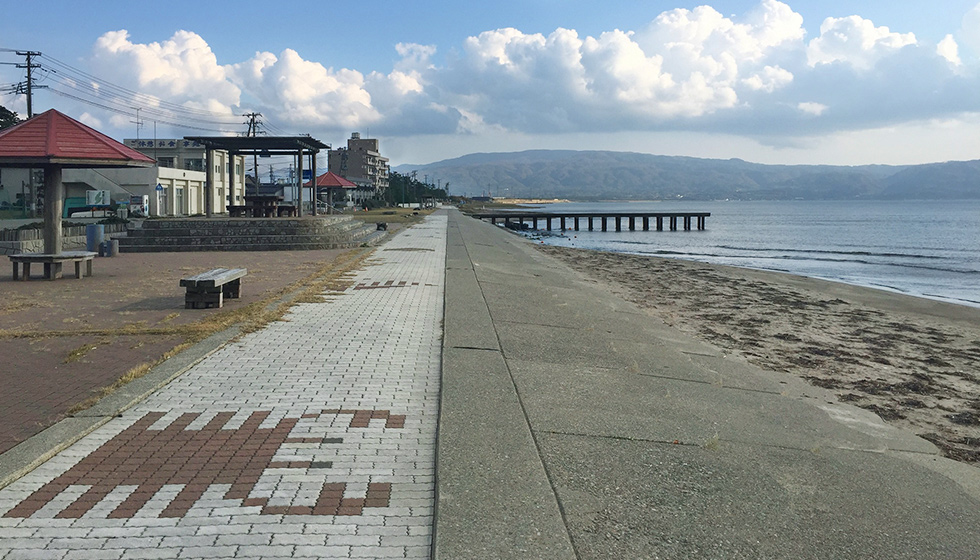 Sawata Beach close to the bar

Sado can be quite cold in winter, and when I was there it was raining often, so aside from the most famous must-see spots I haven’t been traveling too far around the island. I rather concentrated on exploring the area I was living in. Sometimes there were concerts to visit. And I also joined the local karate club. I tried to make the most of my free time, even if I was often alone, at least at the beginning. 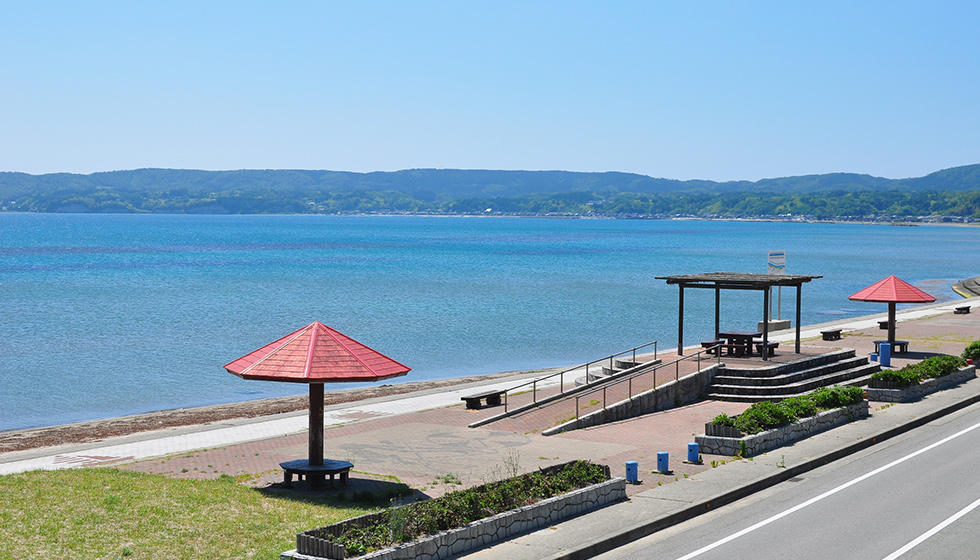 How did your Japanese skills improve while living and working in Sado?

Extremely! I could already understand quite an amount of Japanese before I went to Sado. Otherwise I wouldn’t have landed the job in the first place. But during my time I improved immensely, because I was surrounded by Japanese locals non-stop and was “forced” to understand and speak the language.

Non-English speaking Japanese guests were gathering in the bar every night, having me already socially interact in Japanese language almost daily. And aside from that my boss opened so many doors into the local community. He often invited me, in a very Japanese manner, for after-work drinks in other restaurants or to a karaoke joint, which became next to karate a beloved leisure activity of mine. Having exercised martial arts before. I felt grateful to be integrated into the local karate club.

Being only the two of us and being in almost daily contact with my boss, we got very close and he even invited me to spend Christmas and New Year’s Eve with his family. It was such a wonderful experience and one of my Sado-Highlights. I am grateful for everything my boss did to me. All that helped and shaped my Japanese skills more than I had ever hoped. 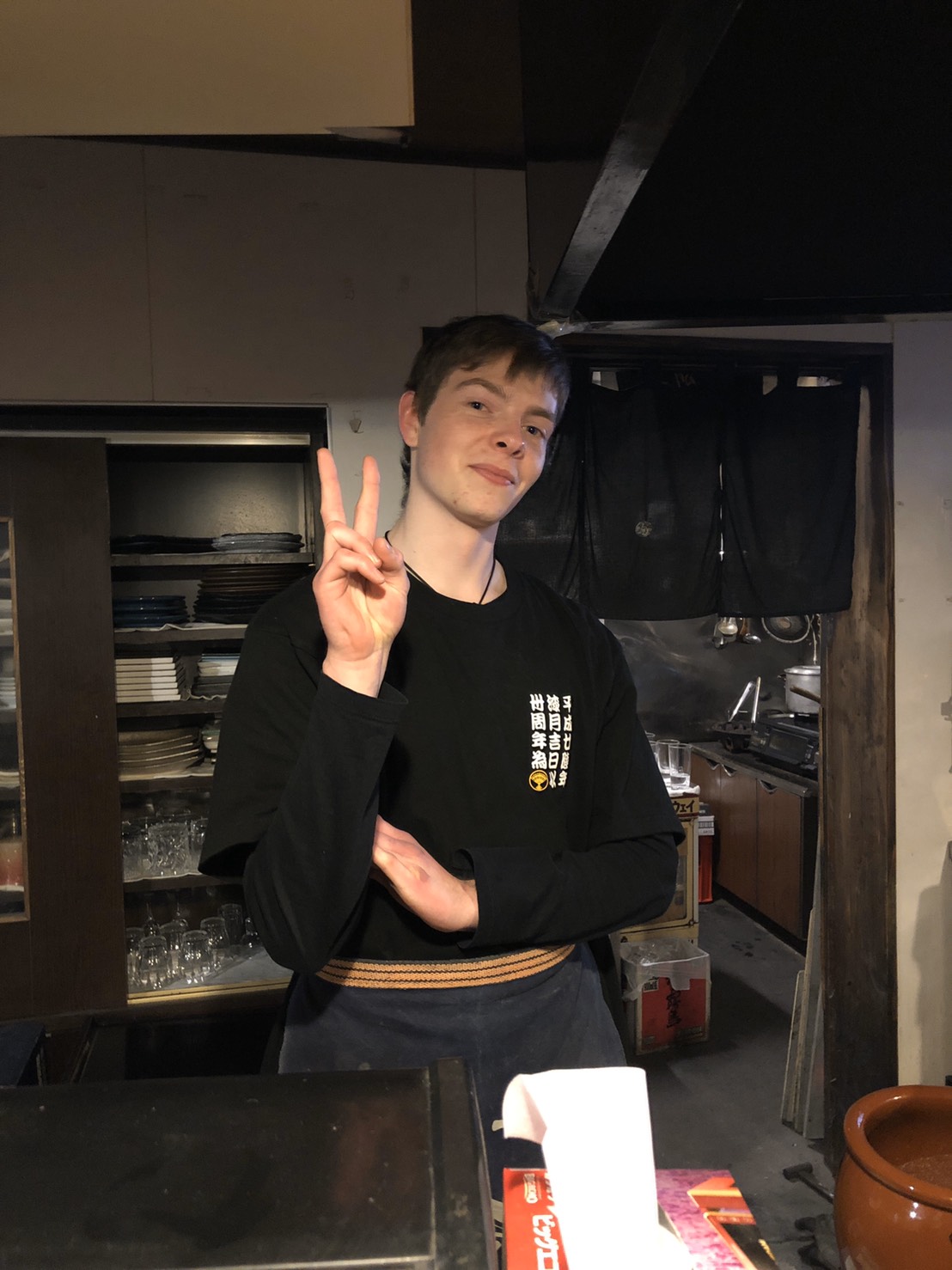 The work itself was really enjoyable. As mentioned, I got along with my boss and I never had any negative experiences with the guests. It was always positive and funny. Even in shifts that were harder than others I still could manage to work dedicated.

Although I have to admit that the working hours need time to get used to. Starting your work day at 17:00 and ending it only shortly before midnight, followed by a couple hours of socializing, might be hard on some people. But I did it with pleasure, especially because it expanded and maintained my contacts with the locals.

The only real negative point was that smoking was allowed in the bar, which I don’t like. That couldn’t be helped though, as until recently that was the norm in most Japanese bars.

How did you originally find the job?

It was always my goal to discover various sides of Japan instead of staying in one place for too long, so moving to the countryside at some point during my Working Holiday was a must. I saw an advertisement poster of the Sado Island Tourism association hanging in the hallway of the Tokyo share house that I lived in during my first few months in Japan. I found out that World Unite!, who is running the share house, is partnered with Sado and inquired about possible jobs on the island with one of the staff members.

After a job interview by phone with the bar owner I was hired. The interview was in Japanese, but the World Unite! staff member was luckily in Sado at the time and could sit next to the owner in order to help us communicate in case it was needed.

May I ask what you earned during your time in Sado?

The hourly wage was 830 JPY. That doesn’t sound much compared to wages in Tokyo, but first of all rural Sado of course has, understandably, a lower minimum wage. And second of all the rent of my apartment was 10,000 JPY only, therefore very reasonable. And in a town as small as the one I was living in there is not a lot of money to spend, so it was more than enough to live.

I was lucky to get such a good deal on the 2 rooms apartment, as it belonged to my boss. The hours I worked I was allowed to write down at the end of each shift independently. 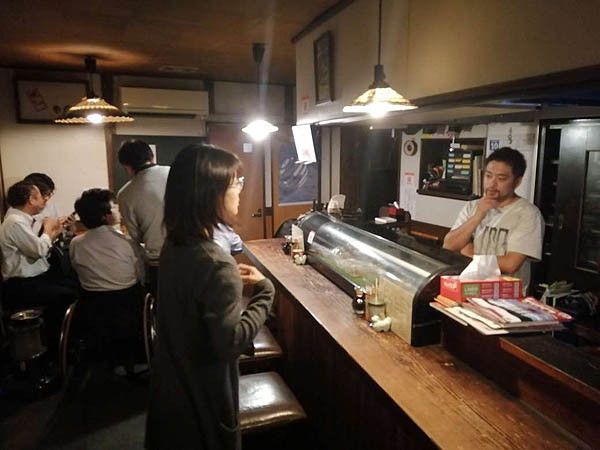 Thanks for the interview, Henry! Could you give possible future Working Holidayers some advice?

Of course! There are some basic things that you should prepare for when coming to Japan and especially if you are planning to work on the Japanese countryside.

The most important thing to work out are some basic Japanese skills. I was lucky that my boss could understand and speak some English as he spent some time overseas. But if I hadn’t studied a little of Japanese before starting the job, I think I would have had a hard time. Also because most guests only spoke Japanese. If you want to be part of the local community, I recommend to reach at least N4 level [on the Japanese-Language Proficiency Test scale], meaning you have the ability to understand basic Japanese. 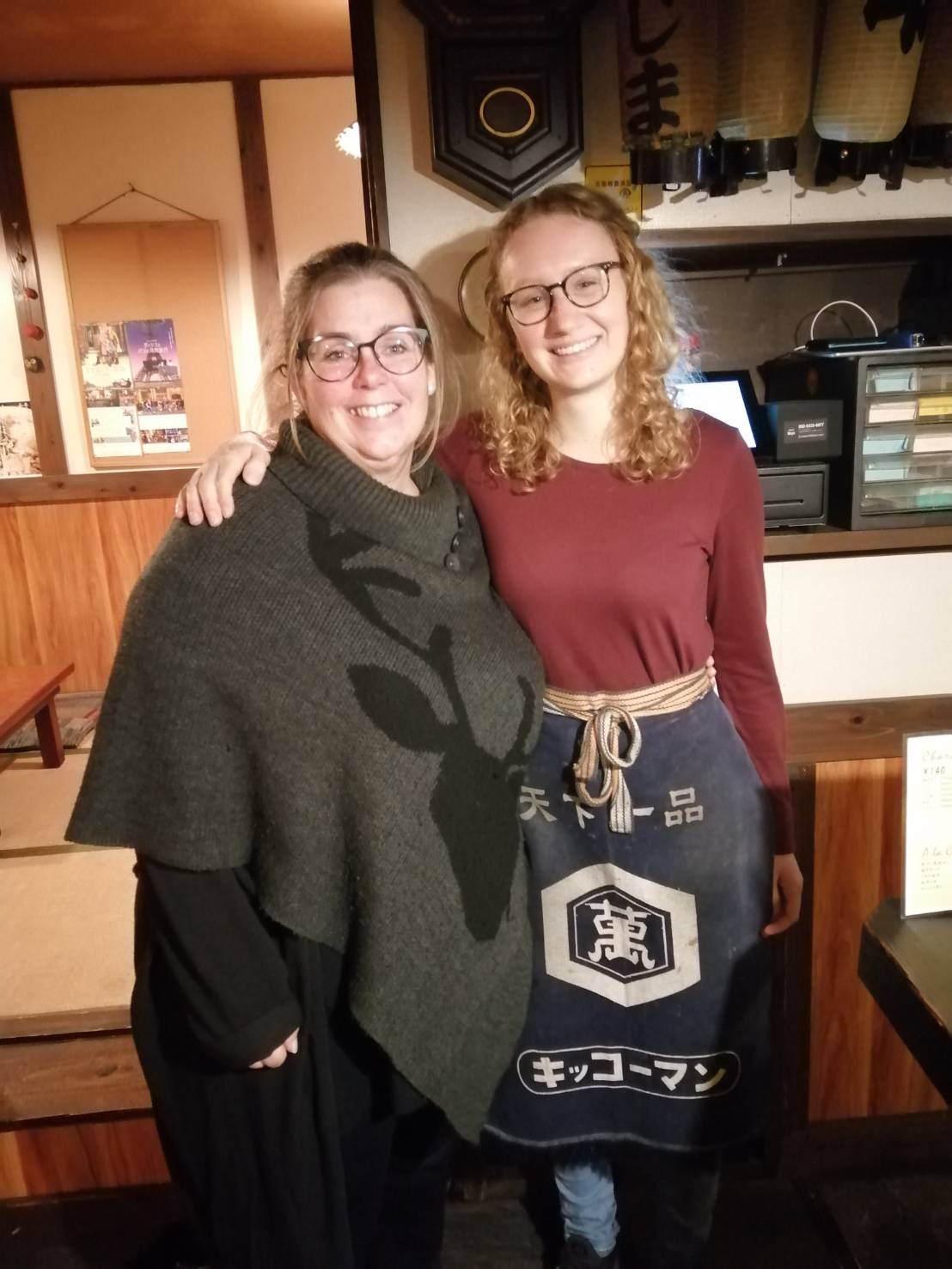 Even though I had that level once I first came to Sado and started working, I felt a little left out at the beginning. I was not yet integrated, did not have a proper routine, and I only had real social interaction during my 5 hours shifts at the bar. This can be a little frightening, but you need to get over it and take the initiative and courage to make the most out of your stay by putting yourself out there. Even if it feels like you were the only foreigner on the island. Being open minded and in for every opportunity that people you get to know want to give you is so important.

My last recommendation would be to not spend your Working Holiday in only one place. I’m doing a Working Holiday here to get to know Japanese people, culture and different parts of the country. As ensuring it might have been spending the first few months of my stay in a sharehouse in Tokyo with fellow English and German speaking Working Holidayers, the repetitive it was. Travel to rather unknown places and emerge yourself in the culture if you want to turn your Working Holiday into something valuable for your life.