We met with Felix M. (19) just a few days after his last shift at a Tokyo located logistic company for educational books. The German worked there for a little over 3 months and was so nice to give us an insight into his Working Holiday job.

Felix, how did a typical work day look like for you?

The company I worked for receives, depending on the season, huge amounts of deliveries from printing groups every day. The packages contain mainly educational books that I needed to unpack and sort into their respective space in the shelves of the storage room, first thing in the morning. Throughout the day my main task was to put our clients’ orders together, meaning, searching for the books they ordered, putting them into packages and making them ready for pickup from the delivery service. I had to be fit in order to lift the boxes, but that was not a problem, as I had done more physically challenging work back in Germany.

The work itself was easy and almost monotonous I have to admit. But the work environment was all the better! The people who worked there were all friendly and we got along well, which made the job really enjoyable. The general company language was English. That made things easier because I barely speak Japanese. All in all it was pleasant to work there.

Did you need any Japanese skills for the job?

No, it was completely doable in English. The only times Japanese skills would have been helpful was when I had to accept the deliveries from the Japanese post service at the beginning of each day. Or when I wanted to know the meaning or reading of a Kanji. But my boss just quickly taught me if needed, although that rarely happened. Consequently my little existing Japanese didn’t improve at all during work. That was honestly the only downside of the job.

How did you find the job in the first place?

One of the World Unite! staff members who is acquainted with my boss posted an advertisement for the job in one of the organization’s chat groups. I just had to send my application documents, in either English or German, because my boss was German actually, to her. She forwarded it to my future employer then. He found interest in me and invited me to a job interview. I was hired and a job training followed during the first couple of weeks.

What were your general working hours?

I started every day at 10:00 and most days I worked around 4-7 hours, depending on how busy we were. The months I worked there (beginning of February to mid May 2020) were rather busy, one of the reasons I was hired in the first place. That’s because school starts here in Japan and other places in April and educational books need to be distributed. So in average I think I worked around 4-5 hours a day, 7 hours on busy days, from Monday to Friday. One single time I also came in on the weekend because there was just a lot to do.

7 hours a day, 5 times a week, that sounds almost like a full time job. I assume you earned enough to make a living? And did that leave you with enough time for private activities?

Definitely! On the weekend or even after work I had enough time to either meet friends or go to the gym. I earned 1,200 JPY per hour, minus tax, which was enough to live. And my working hours left me with plenty of free time. It was pleasant and suited my lifestyle.

And there was a big plus coming with the job. Most employers in Japan pay for their employees’ commuting fee. So did mine. As I worked there 5 days a week, I received a commuter pass. With that I could travel between the train station I live close to and the station close to my work place for free, whenever I wanted. Even on the weekend. Meaning, I saved a lot of money when going to Shibuya, Shinjuku and so on during my free time, as the commuter pass covered those spots.

What are you planning on doing now that your job is over?

Last Friday I had my very last shift. It was a nice experience to get to know my colleagues. But now I’m looking forward to traveling around, because I have spent most of my Working Holiday in Tokyo so far. I have to be back in Germany by the end of August to attend an interview with a university to get into my chosen major computer science. So I want to use the time I have left in Japan the best I can.

Any advice for people who are thinking about doing a Working Holiday in Japan?

Just do it! Come to Tokyo. It’s a massive city, there are always jobs waiting for us Working Holidayers. I wouldn’t worry about that. 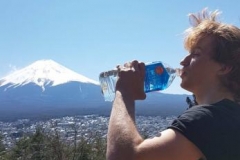 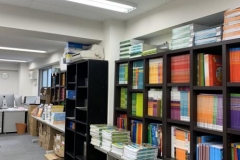 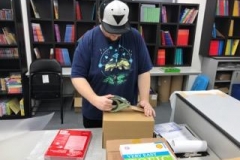