Working Holiday job at the Oktoberfest in Yokohama 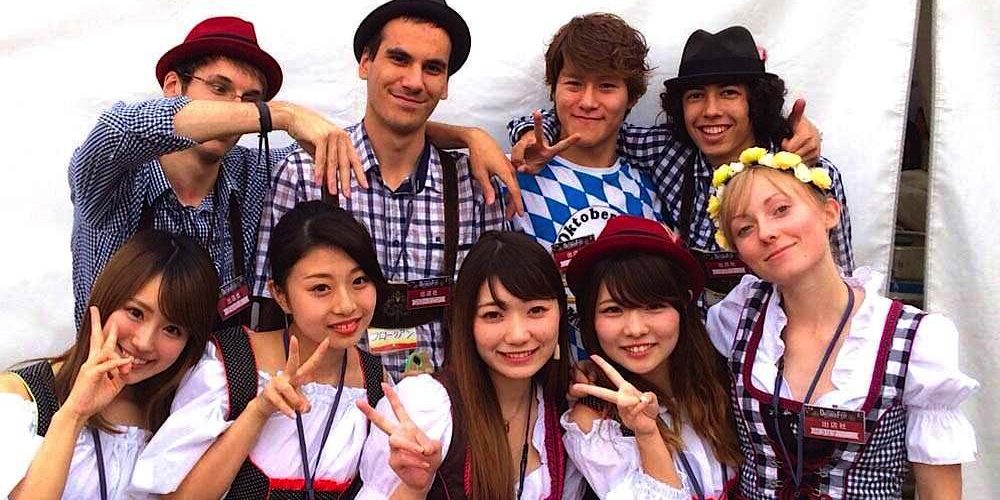 Working Holiday job at the Oktoberfest in Yokohama

Have you ever thought “Why is the Munich Oktoberfest called “Oktoberfest” when it actually starts mid September?”. Well, then you have obviously never visited one in Japan, because you would be even more surprised by the fact that many of the uncountable Oktoberfests here are not even close to the 10th month. They are being held throughout the whole year. One exception is the one in Yokohama, Japan’s second largest city, which is celebrating the festival since October 2002 and is famous for its authenticity. Here we had the chance to interview Alex S. (24), who was working as a promoter for two German beer brands. 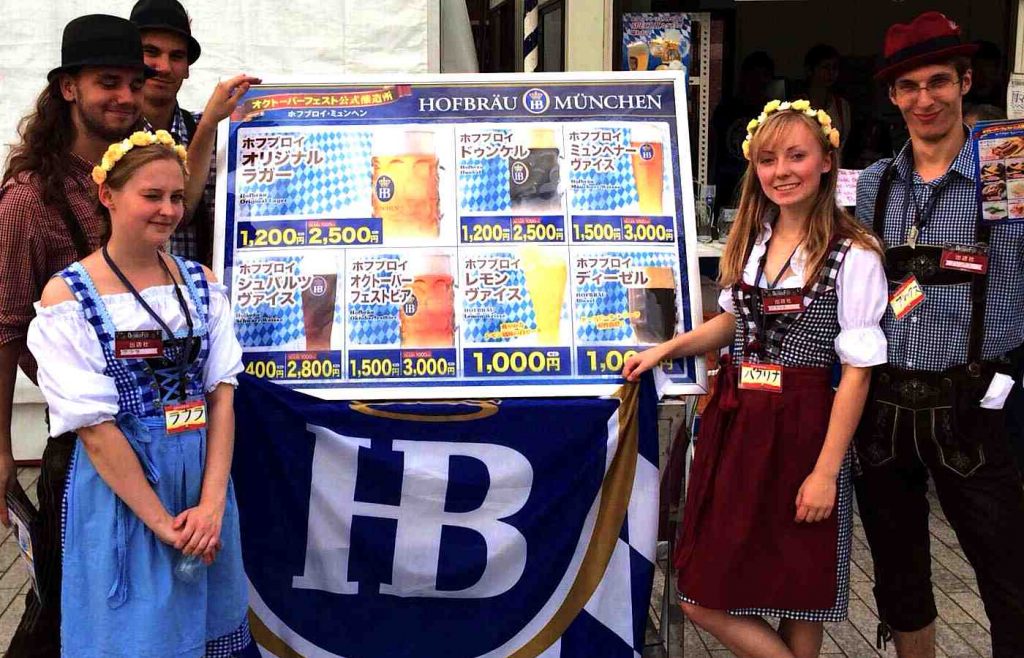 Alex, working at an Oktoberfest in Japan might sound fun, but is it actually?

Yes, it really is! I’m having a blast. But you have to be a certain type of person to be able to enjoy it. I love talking, approaching people who I’ve never met before and start a conversation with them. If you can’t do that, you won’t have pleasure doing this kind of job. You know, my team’s main task is to hand out flyers to the Oktoberfest’s visitors and call out stuff like “Welcome to the Yokohama Oktoberfest! Please try our delicious beer!” to promote our beer booth, which sells Spaten and Hofbräu. We have to advise visitors about where to go, be in a good mood and jolly everyone along. You just have to be an open person and have the right attitude to do that properly.

It’s also fun to dress up everyday. Our male staff is actually wearing the typical Oktoberfest lederhosen with a hat and the female staff  is wearing the dirndl dress to create a German atmosphere. Spending the day with my Japanese and German colleagues is just a great way to earn some money.

Would you let us know how much money you are making during this festival?

Well, at the beginning we were told we’d get 1,000 JPY an hour, but after we were hired, the coordinator raised the hourly wage to 1,800 JPY which is of course fantastic. Especially if you are planning to do some traveling after the work is done, like I am. The festival lasts for three weeks. I’m working 6 days a week, 5 hours on weekdays and 7 hours on the weekend. So, you can see that I’ll receive quite an amount at the end of the festival.

Have you done other jobs during your Working Holiday, too?

Various! I came to Japan in January and didn’t work for a while, as I had saved some money back in Germany. As a rather sociable person I wanted to discover Tokyo and Japan first, before starting work. Therefore I lived very economically to be able to live here without having to work for a while. I even made a 4-week road trip with two German share mates which didn’t cost us that much.

At the beginning of March we came back to Tokyo and I started my first job at a kindergarten, which I landed through Hello Work (a job agency). During the job interview the director of the institution was very skeptical because I don’t have any pedagogical qualifications, but I still received the job in the end. Once a week for one hour I was playing the role of the “English entertainer” for the Japanese children. I had to teach them something in a playful way. I chose the topics myself so I had to be creative, which was not as easy as it sounds.

Another job I’ve been doing was coordinating a group of Japanese elderly people with an interest in Germany and German language. I’ve been handed over this group by a Japanese acquaintance that unfortunately couldn’t do the job anymore. Leading the group was very amusing and entertaining.

In addition to that I was also teaching English as a private teacher. For example, there was this 12-year old Japanese boy from a rather wealthy family I’ve visited at their home. They even have an elevator in their single family detached house! Anyway, I didn’t really like that job because the boy has just become a teenager and he wasn’t really into doing his homework. In general, he was just super unmotivated and I never really knew to which extend I could scold him about that without the parents reacting negatively.

I mainly did private teaching jobs for German or English learners. Whether you are going to like these jobs or not always depends on the outcome you will get. For example, if you can leave a good impression on a student’s parents, or the student actually improves hisor her language skills due to your lessons, it can be a pleasant job. But I also have heard from some share mates that they made bad experiences in this area. Maybe they didn’t have an open attitude towards their younger students.

How did you land the job at the Oktoberfest in the first place?

Again, thanks to a Japanese acquaintance. I met her first at an event of the Japanisch-Deutsche Gesellschaft [Japanese German Society] and we became friends and kept in touch. She then introduced me to a Japanese man called Shota via email. He was in charge of the booths for the Yokohama Oktoberfest and searched for promoters. Shota is a tall guy, over two meters, married to a German woman, used to professionally play soccer in Germany and is now working for a beer importer. After meeting him once he wanted to hire me and also some more Germans, so I asked my share mates. Only few were interested, which I find kind of strange. After all, the salary is not bad and the job description sounded pretty great. Maybe they weren’t sure, if the job suited them? Anyway, the ones who were interested, I think around seven people, met the boss of Shota’s company once for an interview and were hired. That was in July, I think. 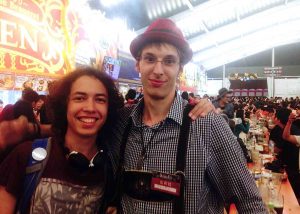 You have to be at least 20 years old and also have a valid working license. It’s also a plus to speak and understand English, as we are having a lot of foreign visitors. Oh and of course you should be German-speaking! Except from this, I dare to say that almost everyone could do this job. Even without speaking a lot of Japanese. You just need to memorise some lines in order to approach the visitors and advertise the beer brand. But I’m also realising that, as I said before, you need to be a bright person. Otherwise the memorised phrases come out monotonously. Some of my colleagues don’t seem to be really into the job, judging by their cold attitude from time to time.

Do you think working at the Yokohama Oktoberfest helped you improving your Japanese?

To be honest, I came to Japan with zero Japanese skills. I was thinking, hey, I can speak English, so why invest much effort into learning Japanese? But in reality it was harder than I thought not understanding the language. So after my road trip I studied very intensely. I wanted to be able to make friends and communicate with them in Japanese. And well, also with the ladies… I’m happy I’ve done that, because I could not only make some good friends, but it also led me to my girlfriend.

The job at the Oktoberfest helped me a lot actually. I learned words that you rather wouldn’t learn in the first phase of your studies, such as “import” and “export”. I kind of forced myself to memorise new words and phrases to be capable of doing my job properly. Talking to the visitors and my Japanese colleagues was fun and helped me to improve my language skills at the same time.

Please give us a resume about your impressions about the jobs you were doing during your Working Holiday.

I have to admit that that being a private language teacher won’t help you to get to know the real Japanese working environment. And you don’t even need to have any pedagogical qualifications to land jobs in the educational field in Japan. I would venture to say that you just have to act naturally and in a charismatic manner to succeed here.

The same applies for the Oktoberfest. You are chosen to do this job for being the gaijin [foreigner], not for having a special qualification. But still I have to say that this job delivers more insights into the Japanese working environment than the job as private teacher. In addition to that it’s a good opportunity to make friends, because being the gaijin makes you kind of special and interesting to the Japanese. You are the one who has to approach the shy Japanese, although the fact that there are coming a lot of young and tipsy people makes this task a lot easier. 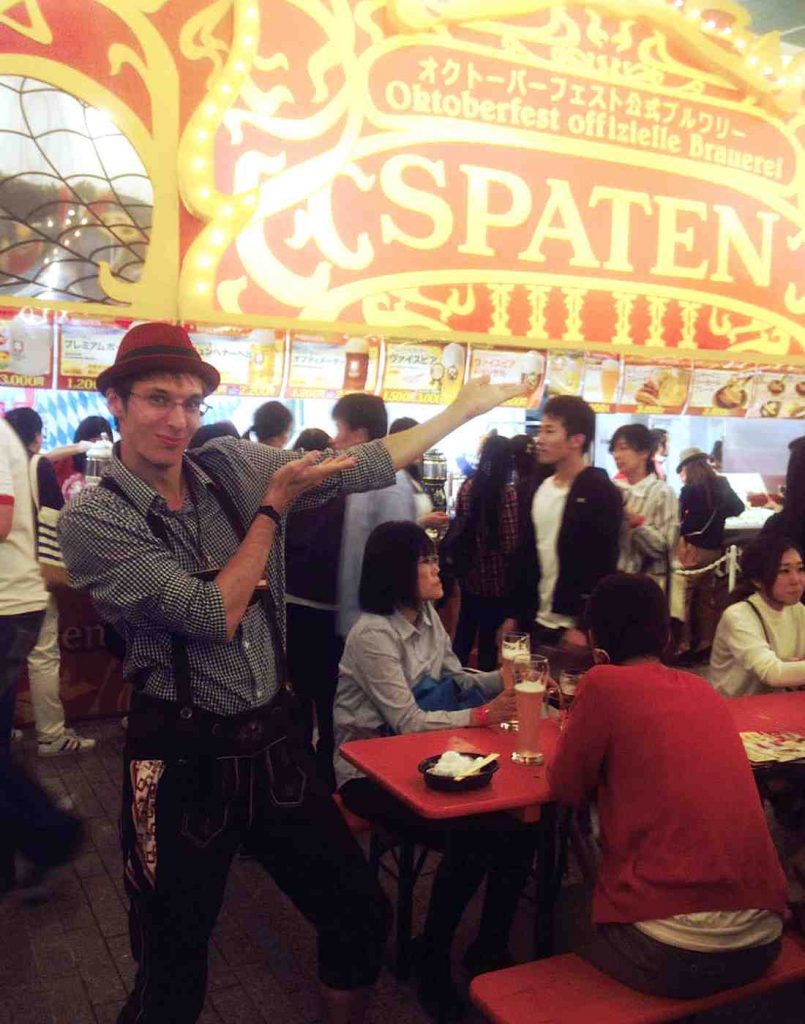 After Alex S. finished his Working Holiday he went back to Germany and is currently searching for a dual course of study, which combines earning money with a traineeship and at best involves the topic Japan. After meeting his girlfriend he stopped studying Japanese, which he is regretting at the moment. He says that they are still together and he wants to start learning her mother language again. One of the nicest experiences Alex had while working at the Yokohama Oktoberfest has been the last evening at work, when he and his colleagues went out to have one last drink together.